Warning: Creating default object from empty value in /homepages/32/d734066430/htdocs/app734066697/wp-content/themes/enfold/config-templatebuilder/avia-shortcodes/slideshow_layerslider/slideshow_layerslider.php on line 28
 Flat earth cruise wants to sail to the edge of the world – Internet Astronaut

Conspiracy theorists who think the Earth is flat are organizing a cruise to Antarctica in an attempt to prove that our planet is a flat disc.

The cruise, organized by the Flat Earth International Conference, is scheduled for 2020. The plan is to sail to Antarctica, where think they would find the frozen barrier that marks the edge of the world. They have announced it as their “biggest, boldest, best adventure yet”, but they are forgetting one very important thing: The navigational systems of all ships are based on the principle that the Earth is round. However, I doubt that this simple fact of life will deter them from their endeavor since they have consistently de that facts of life are not really their thing.

Several theories exist within the Flat Earth community but the common belief is the Earth is flat. One of the most popular models claims the Earth is a large disk surrounded by an ice wall barrier in Antarctica that prevents things from falling off the planet’s edge. This ice wall is believed to surround the whole planet. Conspiracy theorists say it is a couple of thousands of feet thick and stands 164 feet. That`s a shame. If someone would drill a hole through the barrier humanity would have a unique opportunity to get rid of a few thousand less enlightened specimens. 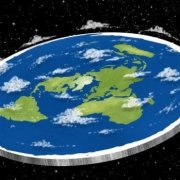 Cat runs away from scary predator

Things I really need: The finger flute
Scroll to top