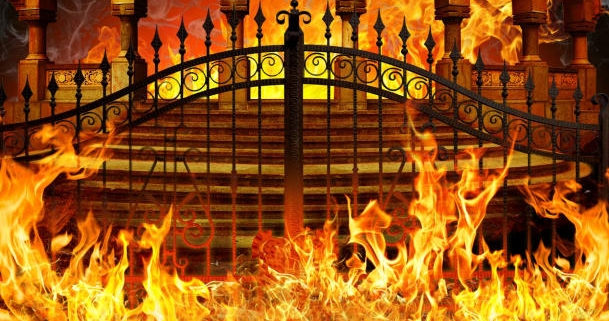 A large number of anti-witch marks have been found in caves at a limestone gorge in England. The marks are said to prevent evil spirits rising from the underworld – and there are hundreds of them carved on walls and ceilings of the caves at Creswell Crags.

Duncan Wilson, chief executive of Historic England, said: “Creswell Crags is already of international importance for its Ice Age art and ancient remains. Even 200 years ago, the English countryside was a very different place; death and disease were everyday companions and evil forces could readily be imagined in the dark. We can only speculate on what it was the people of Creswell feared might emerge from the underworld into these caves.” I know exactly what they were afraid of. They were afraid of the terrible fart demon coming from Hell and stinking up all their homes. That thing is vile.

Smelly demons aside, I did a lot of reflecting on my life and realized that I will definitely end up in hell sooner or later. So why wait and endure this horrible existence full of sociopath bosses, people in the gym who don’t use deodorant and undelivered amazon packages? I am packing my stuff and leaving. You will never see me again. Although I might turn around and come back immediately if there is no decent wi-fi there.

UPDATE: That place is worse than Hell! There is no internet connection whatsoever. Not even 3G. I’m glad I didn’t stay in that shithole.

That’s what I call a professional
Scroll to top