A Brazilian judge has ruled that both twins have to pay support for the child after a DNA test failed to identify which one was her father. One of the two twins doesn`t want to admit he is the dad.

Each man will have to pay 30% of the monthly minimum salary in Brazil and share the medical, dental, clothing and school costs.

“One of the brothers, in bad faith, seeks to conceal paternity. Such behavior should not be protected by the judiciary,” Judge Felipe Peruca wrote in his ruling. “Since adolescence, the pair used their identical appearance to hide betrayals and win over more women,” the Goiás justice tribunal said in a statement, explaining that the mother had a brief relationship with the father after both met at a party. “He told me he had a twin brother, but I wasn’t introduced. At the time I didn’t suspect anything,” the mother said.

Both paternity tests came out 99.9% positive since identical twins come from the same fertilized egg and have the same DNA. A test exists that could resolve this issue, but it costs 15,000 dollars and the results are not necessarily conclusive.

I guess the little girl has two dads now and one of them is a massive dick. 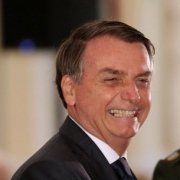 Dog tries to wake up pig

I said no fighting, dammit!
Scroll to top