A Florida man was arrested over the weekend after police officers caught him with cocaine on his nose at a traffic stop.

At around 4:30 a.m. local time on Sunday, deputies from the Hillsborough County Sheriff’s Office pulled over a vehicle at a traffic stop in Tampa, Florida. When authorities approached the car, a deputy immediately noticed that a passenger in the car had a white powdery substance on his nose. Investigators recognized the powder as cocaine and the passenger was later identified as 20-year-old Fabricio Tueros Jimenez.

Deputies photographed Jimenez’s nose before swabbing the substance for a test, the results of which proved that the substance did contain cocaine. “Jimenez was arrested without incident but he attempted to tell the deputies the cocaine on his nose was not his,” according to the Hillsborough County Sheriff’s Office. Of course, it’s not his. He was just keeping it there for a friend.

Authorities also found a backpack contained 250 grams of marijuana and 13 Xanax tablets after searching the vehicle and an additional small bag of cocaine in Jimenez’s possession.

The perils of not thinking things through

This is what happens when police try to help 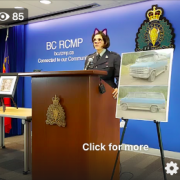 Drunk driver hits himself with his own car
0 replies