Warning: Creating default object from empty value in /homepages/32/d734066430/htdocs/app734066697/wp-content/themes/enfold/config-templatebuilder/avia-shortcodes/slideshow_layerslider/slideshow_layerslider.php on line 28
 Men with beards more likely to have smaller testicles than those without – Internet Astronaut

The study says that males can either be “well endowed” and have large balls, or are instead “well-adorned” with hair. Researchers concluded that it’s “hard to be both” of these things as it takes too much energy to do.

Although the study focuses on animals, humans have very similar evolutionary patterns and many that the same can be applied to human males. As a bearded man, I can confirm that this is most likely true. 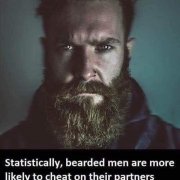 Useless fact of the day #10
0 replies