Over 1000 of seized liquor kept in the storehouse of a police station in Uttar Pradesh, India, has disappeared and local policemen blame rats for drinking it.

Rats have also earlier been blamed for drinking liquor in the state of Bihar where alcohol is banned, narcotics in Jharkhand and currency notes in Assam. They were also accused of causing floods in Bihar.

The latest incident came to light on Wednesday when the police station storage was opened to bring out the body of a stray dog which had sneaked into it a few days ago and died inside. But when its doors were opened, it was also found that several gallons of moonshine seized from illegal manufacturing units had vanished into thin air. Staff then blamed the rodents.

This is not the first time that rodents have been blamed for the disappearance of liquor. In Bihar, where prohibition is in force, rodents were last year believed to have finished off more than 9 liters of alcohol which the police had seized. Rats are such alcoholic dicks. They always drink all the booze and leave nothing for the thirsty policemen.

Superintendent of police Abhinandan Singh said an inquiry into the incident would be conducted to ascertain whether the liquor was consumed by rats or something else had happened to it. I am 100% sure that 1000 of liquor were consumed by tiny little rats and not stolen by corrupt policemen at all. 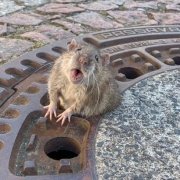 Drinking is not easy

Two drunk gentlemen try to pass each other

Be careful where you get alcohol poisoning
0 replies

Driving at night in Australia is dangerous
Scroll to top