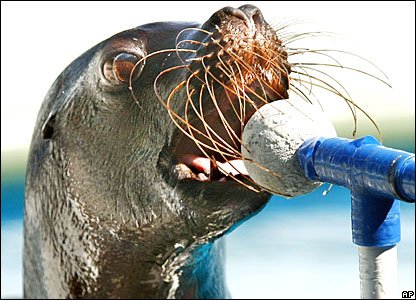 Scientists at the University of St. Andrews, Scotland, raised the seals from birth in order to study if the animals can learn to reproduce sounds, which is crucial for learning a language.

According to a report published in the journal Current Biology, researchers wanted to see whether the seals could be taught to copy melodies and the sounds humans use to encode information.

“For example, different vowels only differ in their formants,” researcher Vincent Janik explained.

The seals were trained to copy sequences of their own sounds, and then to turn those into melodies. The animals also learned to copy human vowel sounds.

“It takes hundreds of trials to teach the seal what we want it to do, but once they get the idea they can copy a new sound pretty well at the first attempt,” he said.

The seal Zola, learned to bark out “Twinkle, Twinkle, Little Star” and the theme to “Star Wars,”. Although he may not have a career in show business in front of him, you can actually recognize the melody he is trying to reproduce.

Don't be so dramatic, seal