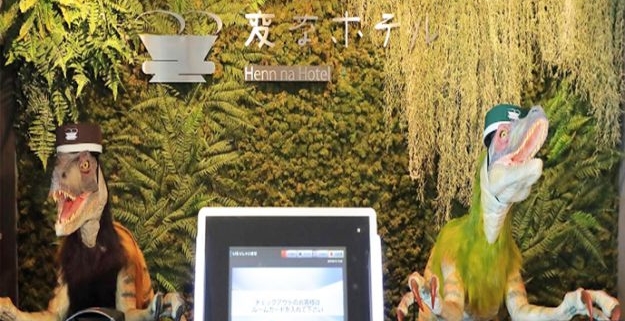 The world´s first robot hotel in Ginza, Tokyo has made half of its 243 mechanic staff redundant after realizing that they just don´t work as well as humans.

The Henn Hotel, which literally translates to “weird hotel”, found that robots annoyed the guests too much and that they were breaking down often. Particularly annoying and rather creepy was the room assistant, called Churi, which would mistake guest´s snoring for voice commands and wake the guests up in the middle of the night by saying: “Sorry, I couldn’t catch that. Could you repeat your request?” Churi has now been entirely removed from the rooms.

The robot receptionist was also replaced because it could not help guests with things like flight schedules or give advice about places to visit and restaurants to eat in. In its place are two Velociraptor robots but humans have to copy the passports of new guests for them. Other issues included two robot luggage carriers which were out of use because they could only reach 24 of the 100 rooms. The robots can only move on flat surfaces and break down if they get wet when outside moving between buildings.

Hideo Sawada, president of the company which owns the Strange Hotel, told the Wall Street Journal he had not given up on the idea of a robot hotel but admitted it needed some tweaking.

The redundant robot staff is now unemployed, sitting at home, complaining about humans taking their jobs and demanding a wall be built somewhere because they are angry.

Best cigarette commercial of all time

This video definitely does not end with Starfish-Hitler
0 replies

Useless fact of the day #7

Recipe of the day: Boiled Pizza
Scroll to top