The Guinness  Book of World Records officials confirmed the cocktail measured in at more than 132 gallons (500 liters).

The drink contained 180 bottles of gin, 154 bottles of apricot brandy and 38 jugs of orange juice, according to Guinness, garnished with a pink umbrella and a giant straw, which Snoop used to mix up the delicious beverage. 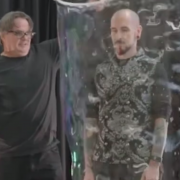 Scratching by a human hand is not enough
Scroll to top