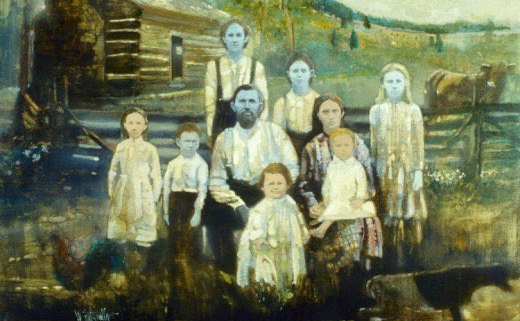 No, this post is not about smurfs. It is about an actual family who lived in 19th century Kentucky. The “Blue” Fugates had a condition called methemoglobinemia which makes the skin appear blue.


This is because of a condition called methemoglobinemia, which causes methemoglobin levels in the red blood cells to rise above 1 percent. It turns the skin blue, the lips purple, and the blood a chocolate brown. Methemoglobinemia can be triggered by exposure to particular chemicals (benzocaine and xylocaine, for example), but in this case, it was inherited and the product of a faulty gene that most probably caused a deficiency in an enzyme called cytochrome-b5 methemoglobin reductase.
Fortunately for the Fugates and their kin, there are no physical health problems associated with their blue skin. In fact, most survived well into their eighties and nineties.

Modern medical science knows that methemoglobinemia is almost always the result of inbreeding and living in a very small community isolated from the world meant that the Fugates didn´t have a lot of potential partners to choose from. Zachariah Fugate married his aunt, their son married a cousin, and their children married cousins resulting in a lot of blue people.

So kids, stay in school and don´t marry your cousins unless you want to have blue offspring.

Honey, I think the dog is broken

Shut up, human!
Scroll to top