Her name is Amethyst Brown and she claims that she has had sex with 15 different ghosts, but is now settling down with a poltergeist she met in Australia.

They met in the Australian bush. “When I was in Australia taking a walk out in the bush, just suddenly it approached me. Just something you feel, an emotional physical presence. I fell in love with it I guess. It’s the one. ” said Amethyst about their first encounter.

On their flight back to England, they had sex in the toilet of the plane and joined the mile high club. Her ghost boyfriend asked her to marry her during their 9-month anniversary trip to the Wookey Hole caves in England. She is not sure what they will write on the wedding invitations or whether they will have them at all because the ghost does not have a name. “There was no going down on one knee — he doesn’t have knees. But for the first time, I heard him speak. I could actually hear his voice and it was beautiful. Deep, sexy and real.”

She is not exactly sure if her boyfriend is actually a boyfriend, but she claims that the sex of the ghost is not important to her.

She is also hoping to have a baby soon: “I hope so. I would hope physical. I’ve been looking at phantom pregnancies. I believe a phantom pregnancy is a real pregnancy but you have a phantom inside of you rather than a human baby. The reason we don’t carry them to full term is the people who have them don’t comprehend it or think it’s possible. I hope through understanding my body I will be able to. I don’t know what it will turn out like. Whether it would be in human form or spirit form – I don’t know.”

Well, congratulations on your wedding. Your mother must be very proud of you, Amethyst. Very, very proud.

Here is the full interview, if you really want to watch it: 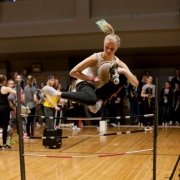 This bird does not care about silly human regulations
0 replies

Dog Has a New Bone

Best Fails of the Week
Scroll to top